Upon arrival at the garden Sunday evening to water after yet another sunny summer weekend, I found these sorry plants laying outside the garden, roots exposed, and a bit of soil around them but very weak and wilted…I’d dare say almost dead. I was about to capture the sun setting on the sunflowers and post about the glories of the garden but had to deal with these plants in need of extreme help right away. It was amazing how fast my emotions shifted from gratitude for the sight of the sunflowers to horror with the sight of these extracted plants.

Why would anyone do this? When could this have happened? Who did this?

Of course these were questions running through my head on top of, I’ve got to get these into the garden and soak them with as much water as possible as soon as possible. Instead of dwelling on the why, who or when, I focused on how I could help. Isn’t that the message most of us should focus on when encountering a problem? Focusing on the solution instead of what and why?

I dug them in as quickly as I could and really soaked them well with the thought it really would be a miracle if I could save them. 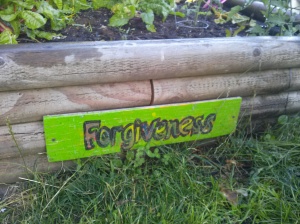 Then I remembered our signs of virtue and what has already been taught to the kids in the Garden Club. One of the signs, actually right near where these plants were pulled is Forgiveness. When I speak to the children about vandalism and this is exactly what the “Swiss Chard incident” can be referred to, I also include a chat about forgiveness. In the simplest of terms, forgiveness means “giving up that the past could be any different.” Admittedly, this quote comes from Oprah Winfrey but it is so simple and so easy to translate back to children that I thought it works best. It worked so well for me to give up that the plants were not pulled out and the past could be different. It happened and now it was time to move on. In saying that it happened however, also meant that this incident happened for the second time. Last year, when the same coloured bright fushia pink and evervesent (sp?!) yellow plants were growing in the garden, they too were yanked out. So questions do naturally come up about the fact that maybe someone out there believes they are actually weeds or harmful to the garden. Needless to say, if it is the same person, they actually deserve even more compassion, another sign by the plants and a heaping cup of forgiveness. Perhaps even some education around the plants would be helpful if we could ever figure out who did this.

I digress, again, the focus is on the solution, get the plants back in, get them watered, shower them in fact with lots of love and have faith that all will be well, all signs around the garden that yet again, teaches us much more than just growing food! Stay tuned on how well the plants come back that and send some love and faith via the net too to nurse them back to health 🙂